Traditionally made by removing metal, rolling technology has revolutionized the achievement of screws. 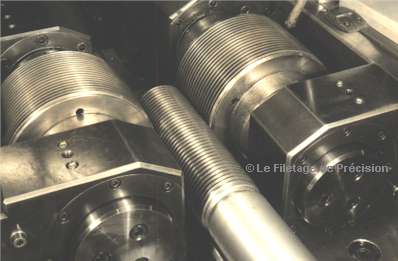 The first thread rolling tests back to the early nineteenth century. The practical implementation, limited to the manufacturing screws, bolts and rivets, began in the early twentieth century.

Initially, the product quality was very low due to the raw material, machining tools and lightness of the machines. By improving these three factors, the cold rolling process was accepted by screw industry in 1930.

During World War II, the US aviation industry has imposed this process for some threads.

Since then, this technique has emerged in many advanced industries.

Among the pioneers, LE FILETAGE DE PRECISION began operation of this new technology in 1957 in France.